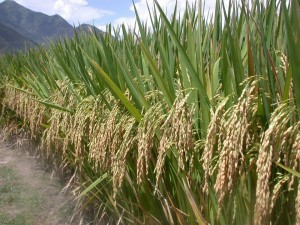 As population grows, farmers will have to feed more people using the same land

As the population boom continues across the world, agriculturists are searching for the next Borlaug revolution. Many populous countries, including China, India, and the Philippines, are struggling to feed a growing population with the same amount of farmland.

The world record yield for paddy rice production is not held by an agricultural research station or by a large-scale farmer from the United States, but by Sumant Kumar who has a farm of just two hectares in Darveshpura village in the state of Bihar in Northern India. His record yield of 22.4 tons per hectare, from a one-acre plot, was achieved with what is known as the System of Rice Intensification (SRI). To put his achievement in perspective, the average paddy yield worldwide is about 4 tons per hectare. Even with the use of fertilizer, average yields are usually not more than 8 tons.

Sumant Kumar’s success was not a fluke. Four of his neighbors, using SRI methods, and all for the first time, matched or exceeded the previous world record from China, 19 tons per hectare. Moreover, they used only modest amounts of inorganic fertilizer and did not need chemical crop protection.

Using SRI methods, smallholding farmers in many countries are starting to get higher yields and greater productivity from their land, labor, seeds, water and capital, with their crops showing more resilience to the hazards of climate change (Thakur et al 2009; Zhao et al 2009).

These productivity gains have been achieved simply by changing the ways that farmers manage their plants, soil, water and nutrients.

The effect is to get crop plants to grow larger, healthier, longer-lived root systems, accompanied by increases in the abundance, diversity and activity of soil organisms. These organisms constitute a beneficial microbiome for plants that enhances their growth and health in ways similar to how the human microbiome benefits Homo sapiens.